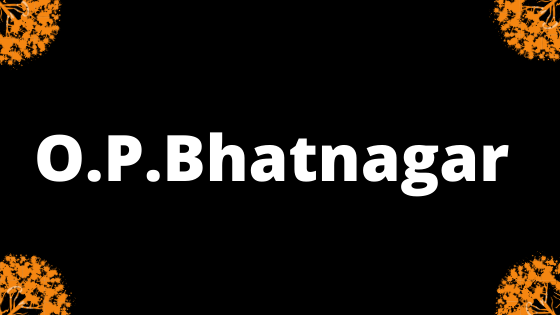 O.P.Bhatnagar has dealt with a number of themes like social consciousness, political awareness, love, nature, philosophy and Indianness. According to Dr. A. N. Dwivedi:

Bhatnagar’s poetry comprehends a great variety of themes, which directly focus on the largeness of his experienceand the solemnityof his involvement in the affairs of his life. (CIE,217)

In this way Bhatnagar understands the tempo and temperature of his times and accordingly orchestrates his poetry. Bhatnagar’s dealing with the theme of politics is myriad and real. The various social problems that agitate the conscience of man are the subjects of his poetry and he tries to throw a good deal of light on all of them. S.C.Bose observes:

“The poetry of O.P.Bhatnagar which has indeed many dimensions is also significant as poetry of political consciousness.” (V. V., 29)

The frank analysis of the fact of contemporary life, and the picturesque delineation make his poetry vibrant and appealing. According to Bhatnagar:

“Most of the vital areas of the life today are governed by the quality of political life and atmosphere are creating and living. Politics today has replaced our religious mode of life. We are fast becoming concerned with a kind of nationalism that may define our role and responsibilities in the making of the destiny of our Nation in future.” (RC, ‘Introduction’, 8)

Indian poetry in English should primarily concern to social and political life of the people of India and it, ‘must democratize its concerns and relations to society and make it a source of shared expectations…it must throw light on the degeneration and corruption corroding identities. It must speak of the total lose of moral values, the gloom and the frustrations pervading the National scene.” (RC, ‘Introduction’9)

Poetry for Bhatnagar is a constant search and effort to symbolize for a better socio-political life .to him, it is ‘a self conscious craft shaped and reshaped by constant practice-refined and retouched by way of the vision. Like life itself, it is the work of a gardener who after removing all weeds cultivates it to final growth and flowering. As such there is no influence of any particular school of thought on his poetry. It is entirely his own- a personal experiment inspired by surroundings, ages, times and above all by human predicament.

The first collection of Bhatnagar Thought Poems (1976) has good deal of poems of political consciousness. The poems rich in thought content lack in emotion like that of romantic poets but the first poem of the collection finds out the process of poetic creation. Bhatnagar writes:

“Poetry’s meaning
Like a deity in enshrined
Words upon words, the edifice build.” (T.P, 5)

Bhatnagar throws ample light on the question concerning God who cannot be resolved out in going round the temple by the worshipper. God is a meaning and deity enshrined in words of poem, the artist alone can expound and seek Him out:

In one of his poems, he predicts the future as gloomy as the present:

“The future looks faded
Like the blossoms of cacti after dawn
The saints from bars, brothels and night clubs
Tasting of casinos and underworld
Turn morals, values and virtues to ice-cream
Licked by fun loving childness in cones.” (T.P, 10)

In the poem ‘The new Scale’ Bhatnagar tries to strike balance between one man’s meat is another man’s poison. The poet finds the dictum worn out in the modern context ‘a simple and honest man measures life in value spoons as he finds dishonesty to be the meanest way of life’. The stark reality of life can be seen as:

“A simple, honest man
In a worn out mode
May still himself find
Measuring life in value spoons
Bribery, corruption and forgery

Bhatnagar wishes to opine that the one’s who amass wealth are the little concern with the interest with their fellow beings, nor do they feel any immorality in acting quite contrary to the code of conduct. In another poem ‘A Woe of Wonder’, Bhatnagar expresses our sentiments and helpless attitude. The poet regrets the diversity, disintegration that our country possesses today. The emphasis of the poet is nothing but Nationality, one sentiment and one attitude. This idea is penned by the poet as:

“Our is a multiheaded country
Looking in no particular direction
Trimurti is an all inclusive vision
From here to eternity risen
Telling the tale of our frivolity.” (T.P., 14)

Similarly in the poem ‘The Bonds of Country Care’ the poet comments on the loyalty and patriotism of those Indians who have been amassing vanity, wealth and arrogance by their services to the countries to which they have immigrated. These so called loyal citizens and tireless patriots visit India for their own cause:

“Loyal citizens proud of patriots
Never forget the care of their country
And fly back home from time to time
Either to choose a bride like a prince
Or buy of ones country a jewel of a land
Placing their kingdom in a safety of bands
Sealed with the loyal assurance with a wink
That although they don’t belong to this country
It sure belongs to their empire.” (T. P., 15)