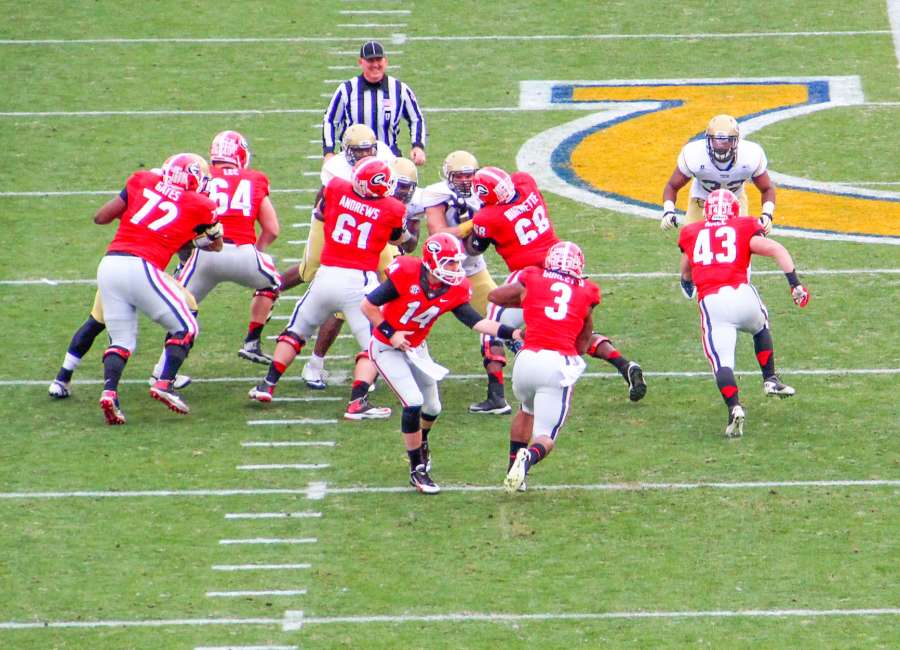 That first fateful game took place in Athens on November 4, 1893 with Georgia Tech, then known as the Blacksmiths, won by a score of 28 – 6. But it was who scored those 4 touchdowns that sparked the rivalry. Leonard Wood was a 33 year old US Army Physician who was officially registered as a Georgia Tech student a only a few days before the game. However, being a full time student, he was eligible to play. This fact upset Georgia fans since during and after the game they hurled rocks a debris at all the Tech players. The next day an article in the Atlanta Journal, by an Athens sports writer, mocked that Tech’s football team was nothing more than a collection of Atlanta residents with a few students thrown in.

A rivalry was born.

For the next several years, Georgia Tech’s football program would perform very poorly. As a result, they decided to hire a new coach from another rival school, Clemson. In 1904, John Heisman was paid $2,250 and 30% of attendance fees to be Georgia Tech’s football and baseball coach. (NOTE: after retiring from coaching football in 1927, he became of the Downtown Athletic Club in Manhattan in 1935. After his death in 1936, the club’s trophy for the best collegiate football player was renamed the Heisman Trophy). Heisman immediately turned Tech’s football program around going 8-1-1 in his first year. By 1908, Georgia alumni were having Tech’s recruiting tactics investigated, by the SIAA (Southern Intercollegiate Athletic Association). The accusations were unproven and the SIAA later ruled in favor of Tech. In his 16 seasons at Georgia Tech, Heisman led the Golden Tornado (as Tech was known) to three undefeated seasons, including a 32 game winning streak and an all important 23 – 6 victory over Georgia. Heisman also led Tech to the highest scoring football game ever played with a 222 – 0 win over a totally outmanned Cumberland State in 1916 (too bad it wasn’t Georgia!).

By 1917, with the onset of WWI, UGA disbanded its football program since many of its able bodies students were recruited for the war. Since Atlanta was a military training ground at the time, Tech retained its male students and continued its football program throughout the war. When UGA revived its football program in 1919, they proudly proclaimed “UGA in Argonne” and “TECH in Atlanta” on parade floats. As a result, Tech severed all athletic ties with UGA, including cancelling several Georgia home games at Atlanta’s Grant Field (UGA commonly used Grant Field as their home field). It would not be until 1925, by mutual agreement, that regular season competition would resume.

In 1932, Georgia and Georgia Tech would become 2 of the original 13 members of the SEC, of which UGA is still a member. Tech however, would leave the SEC in 1964 after coach Bobby Dodd began a feud with Alabama’s Bear Bryant (the result of a cheap shot by an Alabama player that ended the career of a Tech player, and Bryant’s refusal to discipline the athlete). There were also concerns of scholarship allocations, questionable recruiting tactics and student athlete treatment that led to Tech’s departure from the SEC. However, Dodd understood the importance of a rivalry and would lead the Yellow Jackets to 8 consecutive victories (1946 – 1954) and outscore Georgia 176 – 39 in those games. This remains the longest streak of either team in the rivalry.

Several years later, Tech would attempt to re-enter the SEC but their application was denied, in large part due to the opposition of Georgia. With no league to compete in, Tech would found the Metro Conference, for all its intercollegiate sports except football. Similar to Notre Dame, Tech would compete as an independent for the next 15 years, until eventually joining the ACC in 1979, the conference in which it still completes today.

Not satisfied with simply disliking each other on the football field, both institutions have also tailored their fight songs to the rivalry. Tech’s Ramblin Wreck song contains the line “To Hell with Georgia”, and “Up With the White and Gold” is immediately followed by the lyrics “Down with the Red and Black” and later on “Drop the Battle Axe on Georgia’s Head”. The Georgia fight song, “Glory Glory”, which has technically remained unchanged since first being published in 1909, officially ends with G-E-O-R-G-I-A. The student body however, has modified the closing lyrics to “and to Hell with Georgia Tech!”

How to Kickflip on a Tech Deck

How to Find a Trustworthy Computer Repair Tech

Investing in the Right Tech Companies